When I was young, I hated Brussels sprouts; I thought they were bitter and yucky. Now that I am older, I really like vegetables, especially the “yucky” ones. Jill and I look forward to Brussels sprouts being in season each year, but we found that we fell into a pattern of making them the same way every time, so we wanted to branch out and prepare them in a new way. Jill did some research on Pintrist and found a recipe for Chopped Brussels Spouts with Dried Cranberries, Pecans, and Blue Cheese. We were both intrigued by the recipe, but we wanted a recipe where the Brussels sprouts were cooked instead of raw. For Thanksgiving, I followed the recipe exactly, except I sautéd the Brussels in olive oil until tender. Jill’s Grandpa, who usually says he has “no use for those little cabbages,” even like them prepared this way. Although they were very good, I felt that the recipe needed something. So, I adapted that recipe and created this recipe.

Put 5 or 6 slices of bacon (whatever will fit without overlapping) in a large sauté pan. Turn the heat to medium and cook the bacon until crispy. Once crispy, set the bacon aside to cool. 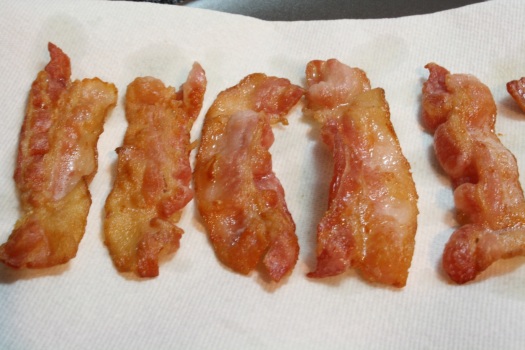 Side note: Although I intended this to be served warm, the leftovers are also good served cold.