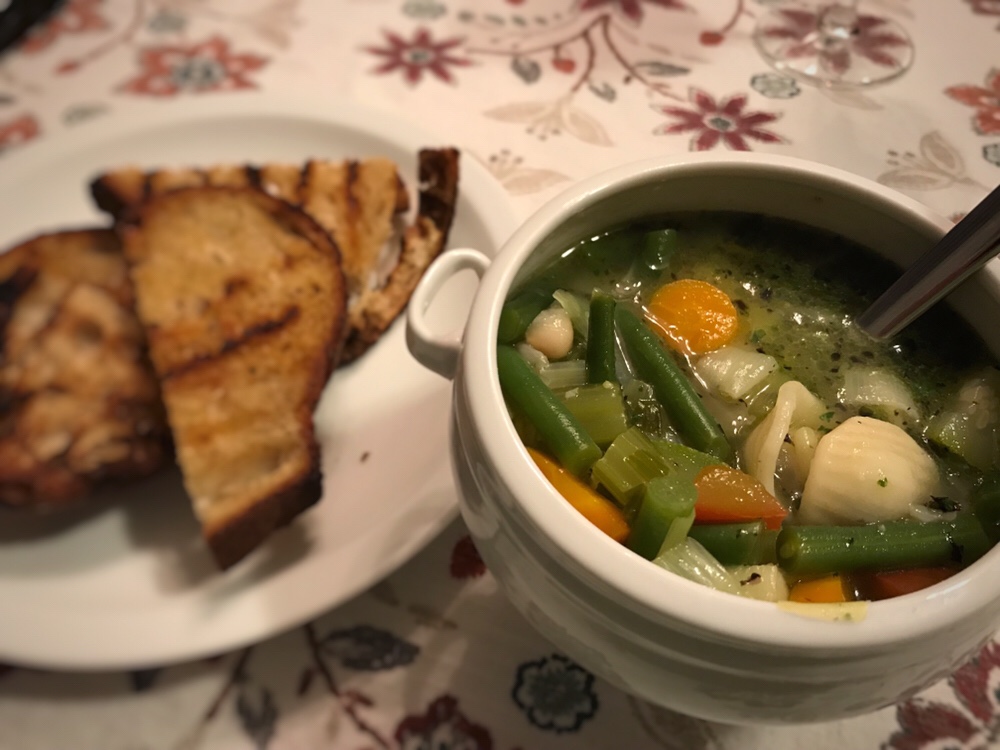 While in line at the grocery store, I fell for a basic marketing tactic and started looking at magazines at the checkout. Most had no appeal. At least not until I came across the Cook’s Illustrated All-Time Best French Recipes. After thumbing through it quickly, I added it to my cart and took it home.

Last night, the rainy weather set the mood for soup. I remembered seeing a recipe for Provençal Vegetable Soup (aka Soupe au Pistou) in the magazine and decided to give it a try. 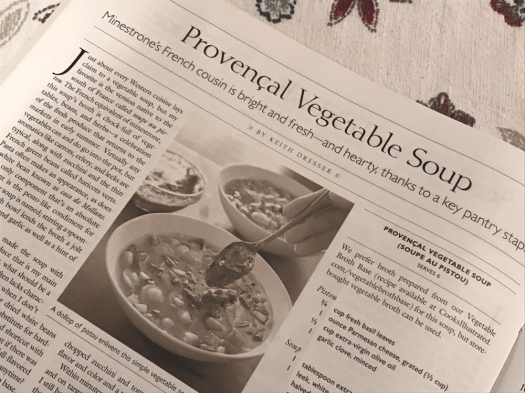 The vegetable soup itself is quite delicious. However, the shining star of the soup is the pistou. Pistou is basically the French cousin of the Italian basil pesto. It is bright sauce made with basil, Parmesan, garlic, and olive oil. I have three different types of basil growing in the backyard, so I used a combination of each. Unlike pesto, it does not have pine nuts.

Adding a dollop of pistou to the soup really infused it with a bright flavor of basil. The soup also went well with a few slices of grilled sourdough bread.

As spring gives way to summer, seek out a copy of Cook’s Illustrated All-Time Best French Recipes and use the fresh herbs and vegetables in this delicious soup.

Knowing that the streets would be congested with traffic during homecoming, Jill and I opted to cook dinner at home instead of going out to eat. Stopping at the grocery store on the way home from work, I thought “pizza would be a highly appropriate Friday night cuisine.” So, I picked up a few essential ingredients and headed home to make what I deemed “pizza worthy of a blog post” and what Jill called “better than take-out pizza.”

Although most people probably would not begin a post about pizza with photos of eggplant, Jill and I both view eggplant as an essential pizza topping. We were rather disappointed when our favorite local pizzaria, Decent Pizza, dropped eggplant from their menu. Thankfully, I had these two baby eggplants growing in the backyard garden.

With an immediate need for the eggplants, the two baby eggplant were picked before they had a chance to grow to their full sizes (this pizza  wasn’t going to sit around waiting for the eggplant to grow), diced finely, mixed with two cloves of garlic (minced) and sauteed in olive oil.

When soft, I took the baby eggplant morsels off of the heat let them await their destiny–a kind of purgatory where tender eggplant wait to ascend to the realm of deliciousness.

Wanting a slightly more rustic taste for the pizza, I opted for sliced Italian style chicken sausage instead of the traditional pepperoni (or the slightly less traditional turkey pepperoni).

Although I enjoy making my own pizza dough, that activity is usually relegated to the weekends when I have more time. So, this Friday night masterpiece make good use of the pre-made 5 grain pizza dough from the Publix bakery.

After rolling it out on a floured surface, I put the pizza dough on a baking sheet and got ready to assemble the pizza.

In addition to making my own dough, I occasionally like to make my own pizza sauce. Again, this is an activity typically reserved for a weekend. Tomatoes are also not currently in season. So, I used my favorite canned pizza sauce (which I opened with the ridiculously cute can opener pictured below).

While tomatoes are not in season, I do have plenty of basil and oregano growing in my garden. So, I jazzed the pizza up by adding a layer of fresh sweet basil, purple basil, and oregano on top of the pizza sauce.

Over the fresh herbs, I added mozzarella cheese, sliced baby portobello mushrooms, the sliced chicken sausage, and the eggplant morsels.

After baking for about 20 minutes at 350 degrees, the golden cheese oozed over the crust while the aroma from the mushrooms, sausage, eggplant, and herbs elicited a kind of Pavlovian response from both Jill and me.

Served with a simple green salad with Annie’s goddess salad dressing, this better than take-out pizza rounded out the week with a blog worthy meal.

Artie picked this from our garden this week.  So fresh and vibrant.  This is what it is all about – enjoying seasonal foods when they are at their peak.  This basil was still warm from the hot Florida sun shining on our garden.  The smell of the handful of basil perfumed the kitchen with the essence of summer.

In her book Animal, Vegetable, Miracle, Barbara Kingsolver talks about her frustration with her local newspaper food columnist who writes recipes for basil pesto made with “tender, young basil leaves” in December.  December?  In December, our basil plant will be a frosty memory and acquiring enough basil to make pesto from Publix would cost a small fortune.  But, we can enjoy this delicious treat all winter long by taking a little help from the freezer.  The easiest way to store fresh herbs is to wash, dry, chop, and mix with olive oil (basically make a pesto) and then freeze in ice cube trays.  Once frozen, the herb cubes take up very little space and can be added to soups, stews, or pasta sauces all winter long.

Oh basil, how I love thee; let me count the ways…