After a truly memorable dinner of tapas and wine at Cúrate in Asheville, I took a momement to briefly thumb through their cookbook on my way out of the restaurant. While I did not take enough time to really absorb the photos and recipes, one page stuck with me. Their recipe for Tomato Bread included a description of rubbing garlic and halved tomatoes directly on toasted bread. Beautifully simple and  rustic.

A couple months later, I picked up the vegetables from our CSA one evening and I was handed a brown paper bag full of fresh tomatoes. My first thought was to make a red sauce for pasta, but then the recipe for Tomato Bread stirred in my mind. Not remembering the specifics, I searched the Internet for Pan con Tomate (tomato bread). 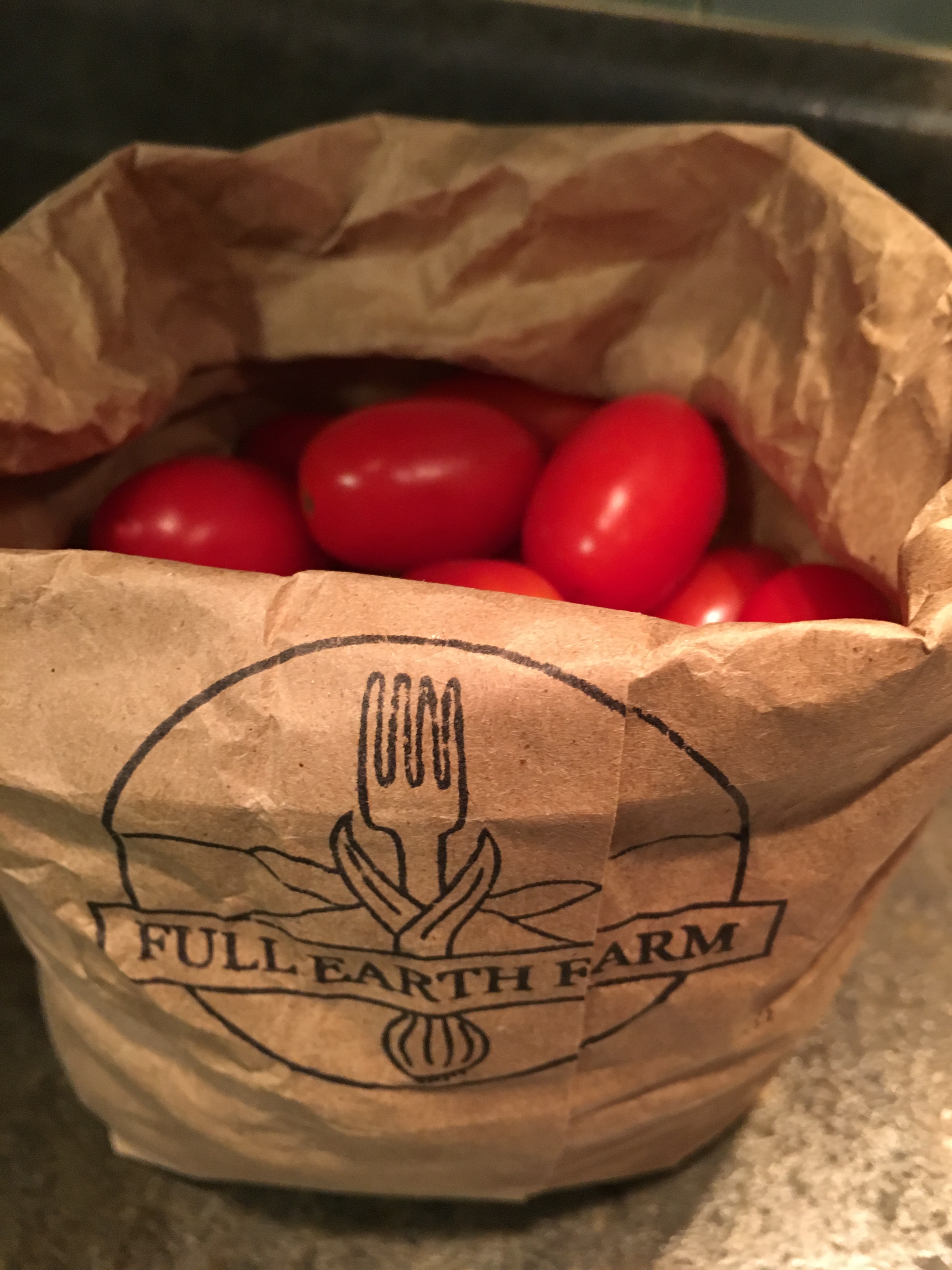 Here is my take on Pan con Tomate:

First, make a small cut in the bottom of the tomatoes. Then, grate the tomatoes into a bowl, discarding the skin. The small cut helps start the grating process, otherwise the tomatoes slides along the grater rather ineffectively. The skin generally remains intact and is easy to remove from the top of the grater. Season the tomatoes with salt and minced clove fresh garlic to taste. I used about a half teaspoon salt and one clove of garlic to about two cups of grated tomatoes.

Slice a baguette in half longwise horizontally, then slice each half into 2 inch wide rectangles. Drizzle the bread with olive oil and broil it until browned. Rub a clove of garlic over the crispy bread and spoon the tomatoes over it. Finish with a light sprinkle of salt and a light drizzle of olive oil.

Because Pan con Tomate is such a simple dish, the quality of the ingredients is very important. The tomatoes needs to be fresh and ripe. The olive oil should also be good quality. When done well, the dish should invoke feelings of eating at the beach or traveling the Iberian Peninsula.

Pan con Tomate makes a great tapa or a light dinner. It also goes well with a larger spread.

An alternate title for this post could be “The One with the Epic Sangria” but I’ll get to that in a few minutes.  This Christmas, Artie’s parents suggested that in lieu of gifts we take a family vacation.  We considered several potential destinations and decided on Tampa.  A few of my friends asked me “Why Tampa?”  I guess the idea that a Central Florida native  would vacation there seemed foreign to them, but it was actually a great place to go and since Artie’s family isn’t from Central Florida, there was a lot that they wanted to see and do.  We stayed at the waterfront Embassy Suites which was right across from the downtown trolley. 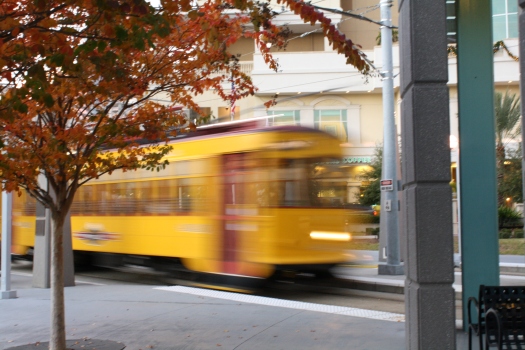 The trolley runs from downtown over to Ybor City and makes stops along the way at the St. Pete Times Forum and the aquarium.  With the exception of a quick trip to the mall, we didn’t have to move our cars at all during our trip – we just hopped on the trolley. 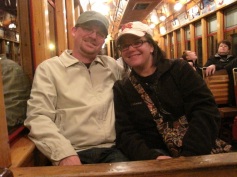 We went to a Lightening game where they beat the Carolina Hurricanes 5 – 1.  It was a great game!

We went to the Florida Aquarium (where Keri pretended to be a conch shell). 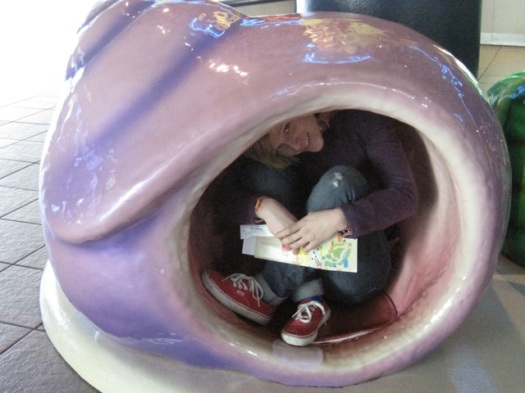 We started with a pitcher of sangria (between the five of us, we polished off two!) which the servers prepare at your table. 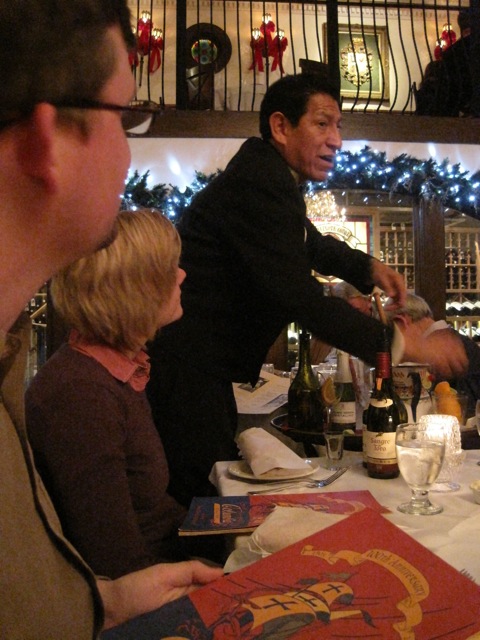 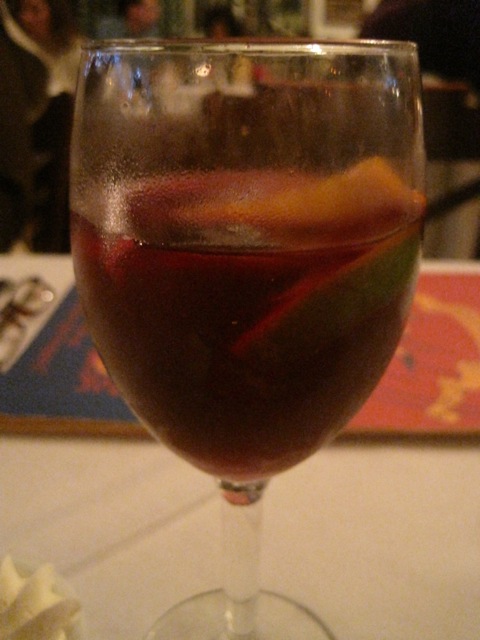 I stuck to two small glasses.  It was rich and fruity and wonderful and packed a little bit of a punch.  See that little pat of butter in the corner?  That was consumed with warm, crusty, chewy Cuban bread.

For dinner, I had the “1905” Salad with shrimp and a cup of black beans and rice.  I didn’t get a picture because they room was darkened for the flamenco dancing show, but the food was amazing!  The black beans were salty and had a delicious bite from the raw onions on top.  The salad was dressed in a garlicky dressing and had the perfect mixture of flavor and texture: crisp iceberg lettuce, briny green olives, tomato wedges,  thin slivers of good quality cheese, and perfectly cooked shrimp.  I had talked about the salad so much that day, I convinced Artie’s mom, dad, and sister to order it, too.  It did not disappoint.

I made sure not to finish my bread, black beans, or salad because I wanted to try one of their desserts.  Artie’s parents got the churros (I tried a bite – not bad) and Keri got a flaming strawberry sponge cake thing (also not bad, but not my favorite).  Artie and I shared got a white chocolate break pudding with rum sauce.

Be still my beating heart.  We each had a few bites and then shared with the table.  It was hands down the family favorite.  It wasn’t too soggy, like some bread pudding can be.  It was warm and dense, cinnamon-flavored, and sweet without being too sweet.

Overall, I think Ybor City is a dive, but if you are in the Tampa area, you should check out The Columbia.  They are Ybor’s self-proclaimed hidden gem and the food lives up to it’s reputation.  Artie’s mom got us The Columbia Restaurant Cookbook so I might be attempting to recreate this bread pudding in the very near future…